LIMERICK band The Hitchers mark the 25th anniversary of the release of their debut album with an online event at 8pm this Thursday March 17, St Patrick’s Night.
The Facebook Live event will feature the band’s newly remastered debut album about to be released on vinyl for the first time next week and a chat with members of the band and some other surprises on the night.
The band explained, “As St Patricks’ weekend marks the actual 25th Anniversary of Fun & Games’ Theatre Royal launch gig we’re going to have us a little online listening party on Patricks’ night if you’d care to join us.
“Very simple idea. Pour yourself a glass of something effervescent then press play or drop the needle on the album at 8pm. As we listen through Niall will be here live on Facebook taking a look under the bonnet of the album (though he’ll try not to talk over the songs), we’ll post thoughts and anecdotes to our social media and answer questions.”

Join in with the event from 8pm this Thursday 17 at this link https://fb.me/e/2UurHfyna 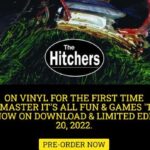